Loopmasters has released Hip Hop Instrumentals, a laid back selection of replica vintage Breaks, Beats, Basses and lush Musical Elements from the studio of London’s Chemo. 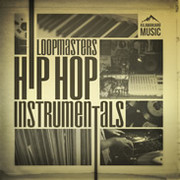 Chemo began as a Producer and DJ for south London group ‘Frontline’ along with MC’s Syanyde and LeEo. Alongside rapper Conflix he created the Character Assassins series of mix tapes which were notable for featuring ‘Assassin Sessions’ which were recordings made in one take to simulate the live Cypher element of Hip-Hop events.

“I wanted to create a pack of drums, melodies and other textures with an organic feel. Suited perfectly for dusty, golden age Hip-Hop, but also for more experimental Trip-Hop / Downbeat production. I try to maintain an analog warmth and grit with my productions and anyone who, like me, is mesmerized by the crackle of a vinyl, should find this kit most satisfying!”

Hip Hop Instrumentals is available to purchase for £24.95 GBP.