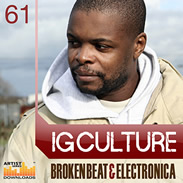 IG Culture is one of the most notable producers responsible for the wealth of material that has emanated from West London under the tag broken beat. He started in music during the early ‘90s as one-half of the rap duo Dodge City, and then he became involved with the People and Main Squeeze imprints. Culture put together the New Sector Movements group, which – like a number of broken beat-affiliated outfits – is a collaborative Entity that combines the talents of several musicians. Culture’s productions are all about rhythm and hybridizations of several music styles and this led him to appear on Roots Manuva’s album “Brand New Second Hand”.