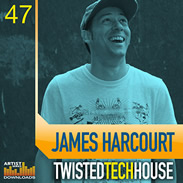 James Harcourt’s tracks & remixes have featured in the the sets of many of the most consistent and celebrated DJ names such as Dave Seaman, Hernán Cattáneo, Nic Fanciulli, James Zabeila, Sébastien Léger, Fergie, Pete Tong among many others.

In 2008, his “Call & Response” E.P. scored one of the biggest selling releases on Beatport.com, and in 2009 his remix of Tyrrell’s “LaLaLaLaLaLa” and Nick Hook’s “Enhanced” on Distinctive, and his no-nonsense remix of Sasha favourite “H20” scored him another Radio 1 Essential Mix spot.

James has really burnt the midnight oil when making this collection which weighs in at just over 1GB and contains 742 24 Bit Samples, including 400 Loops at 126 Bpm, suitable for Tech, Progressive, House and other Dance genres. You also get a huge collection of 109 ready to play soft synth patches for Reason NNXT, Halion, Kontakt, EXS, and SFZ Samplers. Apple Loops, Reason Refill and Ableton Live (Sampler) versions are also available.