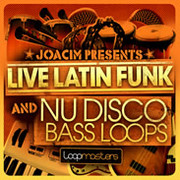 If you are producing Latin Funk, Deep House, Soul, Broken Beat, Nu Disco or other forms of Dance music that require a slice of dope bass playing from one of the most in demand players out there right now – then this sample collection exclusively produced for Loopmasters is definitely going to tick the box!

The “Mad Midget” plays regularly for Rasmus Faber in his live shows around the world and also plays on most of his records and productions. He is no doubt one of the funkiest and most dextrous bass players on the planet and here has laid out a great selection of extended bass parts which can be used by producers worldwide in their music – royalty free.