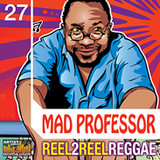 A disciple of Lee “Scratch” Perry, Mad Professor was one of the leading producers in dub reggae’s second generation. His Dub Me Crazy albums helped Dub make the transition into the digital age, when electronic productions started to take over mainstream reggae in the ’80s. His space-age tracks not only made use of new digital technology, but often expanded dub’s sonic blueprint, adding more elements and layers of sound than his forebearers typically did.

As his reputation grew, he became a remixer of choice for adventurous rock and techno acts, most notably revamping Massive Attack’s entire second album under the new title No Protection.

Mad Professor has worked super close with the Loopmasters team to create an exclusive and authentic collection of some of his most prized musical gems from the Ariwa studios reggae vaults – providing producers of Dub, Reggae, Dubstep, DnB and other musical styles with previously unheard and undiscovered audio material!

Mad Professor Reel to Reel Reggae is available to purchase for £29.95 GBP.