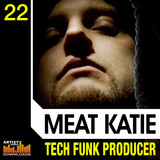 Loopmasters has announced the release of Meat Katie – Tech Funk Producer, a collection of dance floor ready grooves and melodies for the Tech Funk production elite by DJ/Producer and Label owner Meat Katie aka Mark Pember.

South west Londoner Mark Pember (AKA Meat Katie) has had a long history in Dance music. In his time he has recorded for such prestigious labels such as Wall of Sound, R&S Records , Kingsize, Bedrock, Perfecto, Great Stuff, Renaissance, Saw Pember has also remixed for / collaborated with Arthur Baker, U.N.K.L.E, Deep Dish, D.Ramirez, Peace Division, Chicken Lips, Robbie Rivera & James Zabelia, to name but a few.

Not satisfied with being a world class DJ and Producer the self confessed workaholic also found time to set up and run his own highly influential LOT49 imprint with Dylan Rhymes, which maintains a reputation as being a taste-making label, with over 60 releases under its belt featuring artists such as, Dubfire , Audiojack, D Ramirez, Elite Force, Lee Coombs, Robbie Rivera, Marco Bailey, James Talk and Evil 9.

Mark decided to take us back to the days when searching out loops in dusty basements and secondhand record stores lifting kicks & snare, bassloops & Hooks bits of vocals from films etc… this was seen as part of the creative process, finding a 4 bar loop that would inspire a whole track, mark has made it slighter easier for you by allowing you to get a taste of what can be achieved and how far you can diversify with his loops by his demo that moves effortlessly through the techy genres, still maintaining a moody and an overall feel, the very same feel has gained him a reputation as being a unique and influential Artist, very hard to pin down but the words ‘Tech-Funk’ just ooze out of this pack.