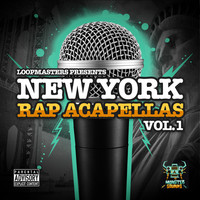 Loopmasters has released New York Rap Acapellas Vol.1, a sample library from some of the best MC’s in NYC.

Monster Sounds label bosses Aquasky / BlackNoise have been fortunate over the years to have befriended and associated with many great vocalists and here they compile the first of what will be many Rap Acapella packs for the professional and the bedroom producer.