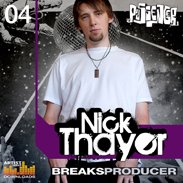 With 30 releases, 2 Mix CDs, a Breakspoll Award, and a back catalogue of remixes being played by everyone from Breakbeat dons the Plump DJs, Freakout funksters The Cuban Brothers, and Baltimore godfather Scottie B, Nick Thayer is no stranger to variety.

Passenger Records latest hero has put together a consummate selection of Beats, Breaks and Bass lines in this exclusive sample collection for Loopmasters Artist Series, for producers worldwide looking for a direct injection of Breaks party samples tuned for the dancefloor and with a pedigree you can rely on.

Nick Thayer – Breaks Producer is available in various formats starting at £19.95 GPB. Some free samples from this release are available for download from the product page.