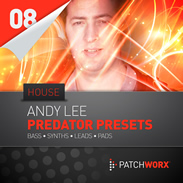 Patchworx 08 – House Synths for Predator, is a collection of House Bass, FX, Leads, Synth and Pad sounds exclusively created by Andy Lee, one of the respected producers and in demand artists of the House scene right now, a DJ and producer alongside the person responsible for countless Loopmaster sample pack smashes!

This pack was produced by Andy Lee, one of Loopmasters long term in-house producers who has enjoyed great success in recent years producing under the Central Avenue name. Andy has released tracks on Purple Music, Spinnin, Stereo Productions, Neurotraxx Deluxe and Urbana this year alone.

Andy Lee – House Predator Presets is available to purchase from Loopmasters for £19.95 GBP.

The Loop Loft ReFill Bundle 50% off