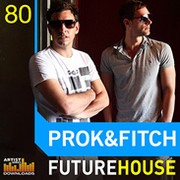 Now focusing on their original productions, Ben Prok and James Fitch’s works have been signed to some of the biggest names in the business: Axwell’s Axtone, Toolroom Records, CR2, Stealth and more. With serious and diverse support from the likes of Steve Angello, Paul Van Dyk and Carl Cox, there’s few clubs worldwide which haven’t witnessed the Prok & Fitch reaction – there’s no doubt that Prok & Fitch is becoming the byword for superior skills in quality House music.

Prok And Fitch – Future House is available to purchase for £34.95 GBP.