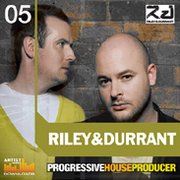 Few DJs and producers can claim as much diversity as Nick Riley and Andi Durrant. With influences including Angello, Ingrosso, Laidback Luke and Axwell, Herve, Ferry Corsten, Paolo Mojo, Lutzenkirchen and Dubfire, its no wonder we had to label this samplepack ‘Progressive House Producer’.