Loopmasters has released Vaultage, a sample library by the Stereo MCs. 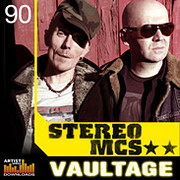 Now you can explore the vaults of one of the most experimental electronic music acts, and for the first time have full access to some of the most precious and creative sample collections available worldwide – from the sketches from the early years of their hugely successful 20 year career, all the way up to outtakes from sessions from their new album, Emperor’s Nightingale.

“Vaultage” is a sonic smorgasbord, a diverse and concentrated collection of sounds which draw inspiration from the years of musical experimentation which the Stereo Mcs have pursued, featuring inspiration drawn from Hip Hop, Rock, Funk and Electronic Experimentation.

Vaultage weighs in at 1.3GB and features 955 24 Bit samples, with 394 Loops between 80-150Bpm, and 561 Single Samples. There are no less than 119 patches for Reason NNXT, Halion, EXS, SFZ and Kontakt compatible soft samplers, and Apple Loops, Reason Refill and Ableton Live versions are also available to purchase separately.

Vaultage is available to purchase for £34.95 GBP. Loops and one shot sample packs are also available separately priced £19.95 each.