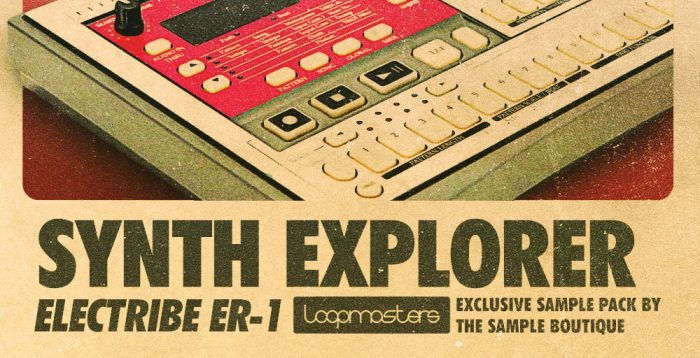 The Korg Electribe ER1 was released in 1999, heralded as the ultimate beat machine of the future. It featured four analog-modelling Synthesizers taken from the Korg’s Prophecy and Z1 series, as well as PCM Drum sounds, Audio Inputs, Delay FX, Recordable Automation and a killer sixty four step sequencer! With modulation options for each Synth part, internal Ring Modulation and a special Bass Boost function – the Korg ER1 sounds like nothing else!

Loopmasters have captured the tonal flexibility of the Korg ER1 in all its glory, with supersonic Basses, choppy electro-Percussion, shimmering Drum hits, metallic FX and epic Leads! 400 Loops come recorded without effects, bringing you a full spectrum of sound – with Tops, Full Drums, Synths, Bass, Kicks, Snares, Percussion, FX and more. You’ll also find bonus `Pog Top’ Loops and over 100 Modulated Loops using a secret recording technique that has been handed down since the late 1990s.

Loops aside, you’ll find a space-age selection of FX with Drones, Movements and FX one hits to create atmosphere and aid smooth transitions. Amongst the 376 one-hit samples, you’ll also find Basses, Synths and Drums – which include Kicks, Tuned Kicks, Snares, Hats and Percussion. 79 Sampler patches and 403 Rex2 loops deliver even more creative firepower!

The sample pack is available for purchase for £19.95 GBP.