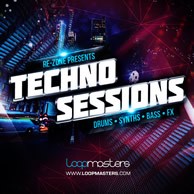 Created exclusively for Loopmasters by Re-zone, whose tracks been released on Toolroom, Black Hole Recordings, 1605, Baroque, Be Yourself Music, Perfecto, Kinky Vinyl and many more.

This Techno sample pack has been inspired by the recent offerings of artists including Umek, Spartaque, Phunk Investigation, Carl Cox, Da Fresh, Spektre, and Koen Groeneveld.

Techno Sessions weighs in at 821Mb and includes 447 Samples, with 174 Loops and 273 one Shot Samples recorded at pristine 24Bit, with 27 included and ready to play patches for Halion, EXS, SFZ, Kontakt and Reason NNXT. Ableton Live, Apple Loops and Reason Refill versions are available to purchase separately.

Cableguys Bundle 20% off for a limited time