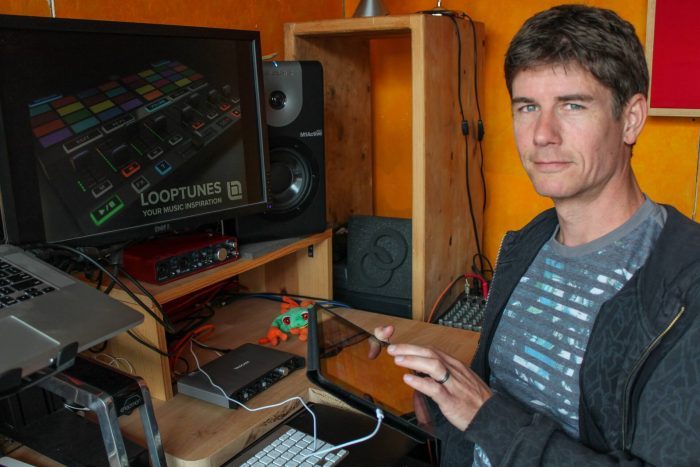 Sonicreef’s Looptunes for iPhone and iPad is a very cool app that lets you create loop sessions on the fly and then manipulate and shape them with a multitude of parameters, all in real time. It’s a fun way for musicians of any skill level to quickly create beats, play along with a loop session, or jumpstart their compositional efforts. To assess his app’s sonic output properly, Sonicreef creator Peter Thom needed to hear it with the best possible fidelity while keeping his setup as simple as possible. After trying other solutions, he discovered the TASCAM iXR audio/MIDI interface for Mac, Windows, and iOS.

“For awhile, I just used the iPhone’s headphone outs,” Thom recalls. “That wasn’t the best-sounding solution, so I tried using a regular audio interface. The interface sounded better but I couldn’t connect it directly to the iOS device; I needed an Apple Lightning to USB Camera Adapter in between. The output of the Camera Adapter was routed to a powered USB hub so I could attach MIDI controllers, as well as the interface. I wanted a simpler solution.”

Then Thom found the TASCAM iXR. “The iXR interface has an Apple-approved chipset that lets it connect directly with my iPhone or iPad, so I don’t need the Camera Adapter,” Thom explains. “The iXR has MIDI In and Out, so it serves as a native iOS MIDI interface, too. It’s a simple and powerful setup, and it easily fits in a bag with my iPad, so the whole setup is really portable.”

With two combo mic/line inputs and line and headphone outs, the iXR provides the connections Thom needs. The interface also features two of TASCAM’s acclaimed Ultra-HDDA mic preamps with phantom power and supports up to 24-bit, 96 kHz recording and playback, delivering the high-end sound quality he sought. “The iXR’s sound quality is impressive,” he asserts. “There’s a noticeable difference in clarity and crispness. Now I can hear what my app and my music sound like at their best.”

A professional musician, Thom recommends the iXR for performing artists, as well as producers and developers. “The iXR is a great solution for live musicians who use iOS devices,” he observes, “because it provides professional-quality sound and lets them set up quickly and easily. That makes a big difference.”

The iXR works with virtually all audio recording apps for Mac, Windows, and iOS and comes bundled with Cubase LE for Mac and Windows and Cubasis LE for iOS.