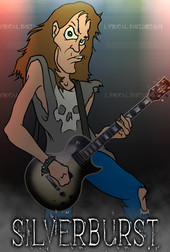 Lyrical Distortion is proud to present Silverburst, a 1979 Gibson Les Paul Custom Silverburst electric guitar, recorded direct via Countryman Type 85 Active Direct Box, Great River ME-1NV, Apogee Rosetta and programmed/scripted for use in Kontakt 3.5 or better to be easily played or sequenced through an amp or amp simulator.

Silverburst represents a unique sounding instrument, sampled with incredible depth and playability.
Silverburst, we sampled four variations of every note for every articulation, utilizing random cycling for authentic swift repetitive lines. In addition, we also recorded the articulations twice, to allow independent control of two guitars for double tracking.

Silverburst is like that of no other sampled guitar library currently available.