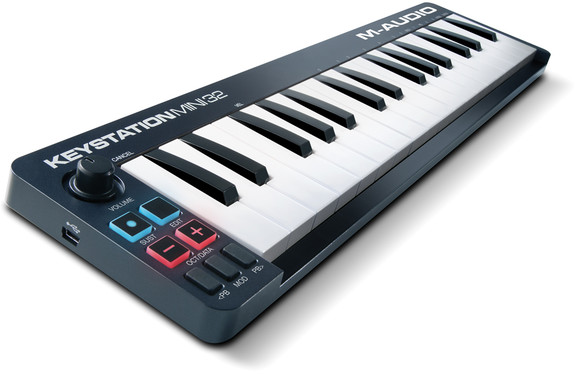 The Keystation 49, 61 and 88 offer an extended physical octave range and full-size keys–ideal for use with a digital audio workstation or in a live performance setup. Lightweight and durable, they travel with ease and compliment nearly any musician’s studio.

New for the Keystation 49, 61 and 88 are transport and directional controls for simple DAW operation without a mouse or trackpad. A 6.3mm (1/4-inch) sustain input jack is included on each for expressive performance capabilities.

Also included with the Keystation 49, 61 and 88 is a powerful software suite for creating music. The Eighty-Eight Ensemble from SONiVOX lets you play one of the most sought after pianos in the world from the comfort of your Keystation keyboard. This powerful virtual instrument is an authentic capture of a 9-foot CD327 Steinway—meticulously recorded and expertly sampled. Ableton Live Lite, flexible music creation software, is included so you can create with professional flair right out of the box.

M-Audio will showcase the Keystation series at Musikmesse, Hall 5.1, Booth B45, March 12-15 in Frankfurt, Germany.