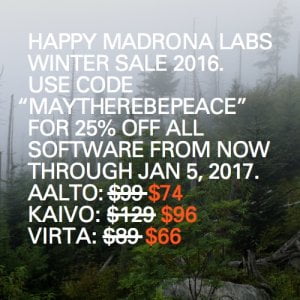 This update introduces a new licensing system, adds features including UTF-8 support, and improves compatibility with macOS Sierra and Windows 10.

The update is free of cost to existing customers, and all plugins are compatible with previous versions.

Coinciding with its rollout of new versions, Madrona Labs has announced a Winter sale with all instruments available at a 25% discount.

Madrona Labs plugins are available for Windows and Mac (VST/AU).

The sale runs through January 5th, 2017. Use the code MAYTHEREBEPEACE on any of the product pages to get 25% off any Madrona Labs plugin.