MakeMusic has announced that the upcoming Finale NotePad 2012 entry level notation software will be available as freeware.

Finale NotePad 2012 will also include select features new to Finale 2012, including Unicode font support (providing access to all characters in any font and facilitating the creation of music in any language) and aspects of Finale’s new ScoreManager™, which simplifies the control of playback sounds.

While this is clearly great news for folks who want to create music notation who don’t currently own any software, it’s also great news for people, like me, who already own Finale. A free NotePad simplifies collaboration with nearly any computer owner: I simply remind my co-conspirators to download NotePad to view, play, and print Finale files I send them AND to make any necessary edits. My music educator friends can create assignments and tests with Finale that thier students can open and complete in NotePad. 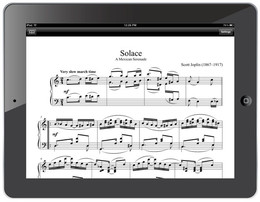 Viewing music on the iPad frees musicians from sorting and managing printed music, and makes it easy to bring thousands of pieces of music to practice, rehearsals and gigs. Unlike the printed page, this music can play back, facilitating learning and selection of new titles. Music for the iPad app can be created using Finale as well as with the free, downloadable Finale NotePad.

“We’re extremely excited to be showing our iPad music notation app this week,” said Karen van Lith, MakeMusic CEO. “Enjoying Finale scores on the iPad offers a glimpse of the technology solutions we have in store for musicians.”

On display this week at NAMM, the music industry trade show in Anaheim, California, the app will be available to the public later this year.