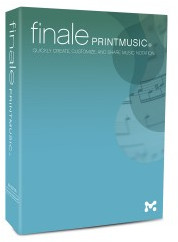 MakeMusic has announced the release of Finale PrintMusic 2014, an updated version of the notation software for Windows and Mac.

PrintMusic is easy to use and fun to learn. Quickly create orchestrations of up to 24 staves, extract parts, hear your music play back, and print beautiful sheet music.

Finale PrintMusic 2014 is available for $119.95 USD. Upgrades from previous versions are also available.