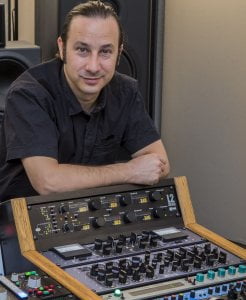 One of the acknowledged masters of mastering, Maor Appelbaum has sometimes been mistakenly typecast as a heavy rock specialist. It’s true that he has done stellar work for such weighty artists as Rob Halford, Yngwie Malmsteen, Sepultura, Dokken, and Fates Warning. But his credits cover virtually every musical genre, including global stars like Faith No More, Yes, Meat Loaf, Walter Trout, and William Shatner, along with an assortment of jazz and classical artists.

With his track record and client list, Appelbaum could use any equipment he wants, and his gear list is impressive. But for many tasks, nothing quite does the job like his two Manley Stereo Variable Mu® limiter-compressors (Vari Mu), two Mini Massive EQs, and one Massive Passive EQ.

“I don’t use Manley gear because it’s the only thing I have, I use it when it provides the sound that’s right for the recording,” Appelbaum asserts. “In some cases I need a sound that I can’t get from anything else. For example, I did a prog rock album called The Prog Collective, and I used the Manley Variable Mu to clean things up. The Variable Mu can sound hi-fi-ish-not screaming in the uppers but more like a round sound. For mid-tempo stuff, especially, it makes the track sound very round and nice. It gives you a kind of creamy flavor. The processed track almost feels finished but not entirely so because if it were finished you wouldn’t have room to do anything else.”

Appelbaum has the mastering version of the Variable Mu, with Manley’s T-Bar mod all-tube front end and High Pass Side Chain mod. “I often compress in small amounts, maybe 2 dB or less, just to get the warmth of the device because it has a really nice tone,” he explains. “I get mixes that already have compression, so I compress just a bit. You’re not hearing any movement of the compression; there is some, you just don’t notice it.”

His two Mini Massives are go-to EQs for a lot of applications. As with the Variable Mu, sometimes a little bit is just enough. “I would call it a little additive EQ,” Appelbaum avers. “I don’t go far with it, just a bit to add weight on the bottom or to add something on the top. For me, the Mini Massive is more about fast response for transients than the Massive Passive. When I need some high end but I don’t want to clean it up, or I need a bit more punchy low end without it being roundish, the Mini Massive is really good.”

When vocals are well recorded but need a bit of color, Appelbaum relies on the Massive Passive. “It’s not just that I need to boost at 1 kHz but I need 1 kHz that sounds creamier, more liquid,” he states. “For that, I use the Massive Passive to focus on a few frequencies that need more roundness.”

On one project, Appelbaum client asked him to make the vocals a bit warmer and more tube-ish. “A different EQ could have helped around 1 kHz,” he agrees, “but to get that tube-ish sound, I used two bands on the Massive Passive just to emphasize the vocal area. I sent it to the client, and their response was ‘perfect, that’s what it needed.'”