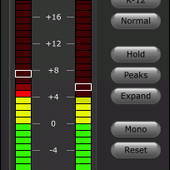 Implementation of a K-System meter according to Bob Katz’ specifications.

All meters and counters have been thoroughly validated. So far, K-Meter only supports mono and stereo signals, but I have added experimental support for surround sound. I’d love to get some feedback on this.

The K-System average meters register RMS only, but support of ITU BS.1770-1 loudness weighting is planned.

K-Meter is available as a freeware effect released under the GPL license. Linux and Windows VST plugin versions are available to download, as well as a standalone version for Linux and the source code.