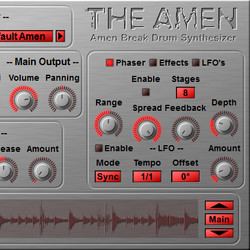 Mastrcode Music has released The Amen, a DB-Force series instrument plug-in for Windows.

The Amen is the legendary “Amen Break”, packed in a powerful VST Plugin. No more wasting Your time with slicing and re-arranging Your Amen Break wave file. Just play Your MIDI, turn some knobs and make beats.

The Amen Break is already sliced up into it’s single drum hits. Each single slice can be triggered by it’s own MIDI note. It can be rearranged with no limits, so that You can produce the “Amen”- beat of your choice.

The Amen plug-in for Windows (VST) is available to download as freeware.