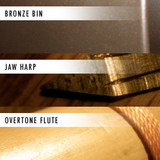 Microhammer has announced the release of the Microhammer March 2010 Bundle, a collection of three new instruments for Kontakt.

Microhammer is launching a series of new products around 15th of every month. All monthly releases will be followed by a bundle containing all the products at a highly favorable rate, so you can get it all. The bundle is only valid until our next release, so grab it while you can. We are proud to announce our second launch bundle, which consists of all the Microhammer March titles.