Console manufacturer Midas has announced that it plans to rocket availability of the M Series by appointing Electrovision as an additional UK dealer, as a result of the popularity of the series amongst audio professional in the United Kingdom.

Based in Merseyside, Electrovision have a long-standing relationship with MIDAS’ parent company MUSIC and now add to an already impressive line-up of products from TURBOSOUND, TC ELECTRONIC, TC HELICON, BEHRINGER and BUGERA. 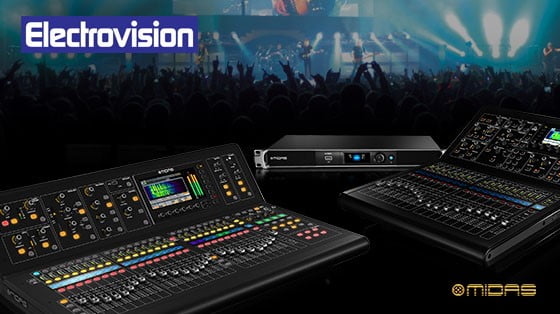 Unrivalled Quality
“MIDAS’ expertise in making affordable, rock-solid and reliable consoles is unrivalled, so having the M Series is very important to us and will allow our customers to enjoy the ultimate mixing console experience,” commented Kevin Roche of Electrovision.

Epitome of Excellence
“MIDAS’ success is in its award-winning PRO Series preamplifiers, advanced digital technology and industry-leading ADC and DAC converters. This isn’t just a good mixing experience, it’s what we call a luxurious mixing experience: that’s why MIDAS is the epitome of excellence!” comments Uli Behringer, Chief Disruptor of MUSIC.

The MIDAS M32, M32R and M32C digital consoles, as well as the DL16 and DL32 digital stage boxes are now available from Electrovision.