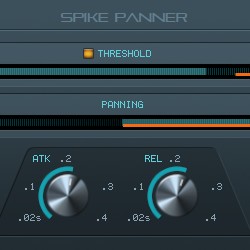 Spike Panner, the first in a new set of creative mixing plugins (a sequel to last year’s Provoc/SLVR series), automatically pans your audio when it reaches your set threshold.

It allows you to take control of the center of the stereo image and create interesting spatial movement. One of its many possible uses is to allow the placing of more instruments in the center without drowning important elements like kick, bass, and vocals.

The Spike Panner plug-in costs $36 USD. It is currently on sale at a 50% discount.