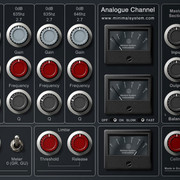 Comprising of a comprehensive analogue modelled channel strip and 8 band EQ this collection contains two powerful tools that can be used on you channel and master busses to aid you with both mixing and mastering.

The Analogue Mixing and Mastering Collection for Windows (VST) is available to purchase for £29.99 GBP.