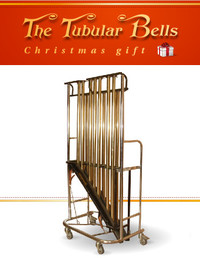 Modartt has released a new free add-on as Christmas gift: The Tubular Bells.

As a Christmas gift to all Pianoteq customers, we hereby announce our latest instrument add-on: a virtual copy of a Tubular Bells, also known as Symphonic Chimes.

Tubular Bells is an instrument made of brass tubes of graded length that are tuned to a chromatic scale and usually covers the range of 1½ octave. The sound is produced by striking the top edge of the tubes with a plastic-headed hammer. The instrument often includes an attached damping mechanism. It appeared for the first time in England in the late 19th Century, and is ever since part of major symphonic orchestras, known as symphonic chimes.

The Tubular Bells add-on is modelled after a Bergerault 18 Note concert chimes. Thanks to Pianoteq’s powerful technology, the note range in the virtual copy is extended into a 4-octave instrument.

The Tubular Bells is available to download for registered Pianoteq users.