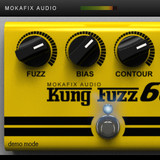 Mokafix Audio has released version 1.1 of Distortion FX, a collection of distortion effect plug-ins for Windows.

The Distortion FX plug-ins are available as VST effect plug-ins for Windows PC, priced at 9 EUR each or as a bundle for 36 EUR.

The freeware Metal Clone and NoAmp! effect plug-ins have also been updated to 1.1.