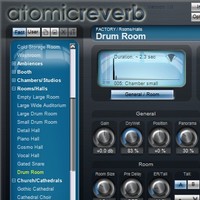 Molecular Bytes has announced the upcoming version 1.1 of its AtomicReverb room and reverb processor plug-in for Windows and Mac.

The update adds many new major features including performance- and quality improvements, MIDI learn, oversampling, new parameters and more. It also adds 80 new factory-presets and a stand-alone application for Windows. With the release of version 1.1, atomicreverb will be also available for Mac AudioUnits and VST 32/64bit.

AtomicReverb v1.1 is scheduled for release mid December, 2012. The plugin is currently available to purchase for Windows (VST), priced at 69 EUR. The update will be free for current users.