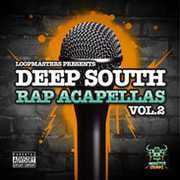 Monster Sounds label bosses Aquasky / BlackNoise have been fortunate over the years to have befriended and associated with many great vocalists and here they compile the first of what will be many Rap Acapella packs for the professional and the bedroom producer.

This pack is far more explicit than the previous. Not for the faint hearted or those easily offended!!! Going for that real gritty Southern rap drawl, the content covers what you would expect with plenty of profanities to grime up your track. Featuring vocalists Baller B, Big Mike, Ka Ching, Lil O and Lo Lo, these 5 wordsmiths raise the heat with some merked out content alongside some party lyrics and plenty of one shots to spice up your recording process.