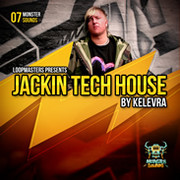 Monster Sounds has released Jackin Tech House, a fresh collection of sounds from the studio of Kelvera for producers of Jackin, Tech and Electro House music.

Kelevra is a name that most people are now familiar with and if not by name then very likely due to his incredible productions and focus. He spearheaded the Jackin House scene and dabbled in the Fidget scene when it first evolved. During this era he created the Fidget Kingdom label and stamped his authority all over it with the labels debut release ‘Jak Music’ which he wrote alongside Whiskey Pete. The tunes kept on coming with cutting edge guests such as Micky Slim, Moston & Malente, Aniki, Klaus Hill, Jaimie Fanatic, Bill Eff, Breakdown and of course himself and Whiskey Pete.

Kelevra presents Jackin Tech House is a heavy dose of fine productions skills from the mind of a scene leader. And keeping with the Monster Sounds artist release formula this pack features a guest vocalist from California by the name of Tory Davis.

Jackin Tech House by Kelevra is available to purchase from Loopmasters for £39.95 GBP.