Loopmasters has announced New York Rap Acapellas Part 2, a collection of rap acapellas by Monster Sounds, featuring some of the best MC’s in NYC. 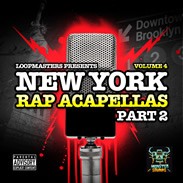 Monster Sounds label bosses Aquasky / BlackNoise have been fortunate over the years to have befriended and associated with many great vocalists and here they continue in the successful Rap Acapella series bringing the authentic performances to your studio.

Taking up where NY rap left off Their ‘go to’ man for this pack again was friend Dan Walker aka the awesome NineLives The Cat. Residing in Brooklyn, Dan has appeared on many great house and breakbeat tunes over the years with appearances on projects by Kelevra, Rennie Pilgrem, Ninja Sonik and Costello amongst a host of others. Dan is also part of the helter skelter art punk outfit “The Deathset” who have just recently signed to Steve Aokis “Dimmak” and who have been lucky enough to have had both Diplo and Spankrock adding flavours to their sounds on past records. NineLives has a plethora of past and upcoming original records many of which have been put out most recently by Boogie Boutique and Roca Records and has played a variety of underground NY parties pushed by the likes of Knife Fight and Radical Outing. NineLives The Cats tongue in cheek style is reminiscent of early Beastie Boys/RUN DMC styles of the 80’s.

The sample pack is available from Loopmasters for £34.95 GBP.