Moog Music has announced that it has paired up with sound design and synthesist wizards Drew Neumann and Kevin Lamb to concoct a brew of unsettling and bone-chilling sounds that are now available as a free download for Animoog, the incredibly popular, professional polyphonic synthesizer designed for Apple’s iPad.

Moog instruments have been iconic in popular music for more than 40 years, but they’ve also been responsible for creating the sounds of fear, suspense and terror in popular cinema. From Hollywood blockbusters to horror films, and even The Simpsons’ Halloween specials, Moog synthesizers have added a spooky element to thousands of soundtracks. 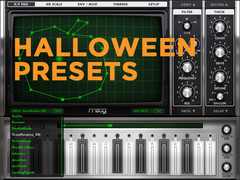 In the “spirit” of Moog’s scary side, and due to the phenomenal success of Animoog as one of the top-10 paid iPad apps on the iTunes store, Moog Music is offering a Halloween sound set to users for free on it’s website (http://www.moogmusic.com/content/animoog) through Friday, November 4.

“It’s always thrilling to hear the new sounds that artists and sound designers create when we have developed a new instrument,” said Cyril Lance, chief engineer at Moog Music. “In this case, Animoog inspired Drew and Kevin to create an entire library of spooky sounds for Halloween which we are extremely excited to share with you.”

The add-on to Animoog includes presets that span the range from sci-fi to horror, and, in some cases, look like their names. Users can watch for the Zombie Hand, run from the Cyclops, escape the Evil Portal, and avoid the Scythe of the Grim Reaper!

The heart of Animoog is Moog’s Anisotropic Synthesis Engine (ASE), a technology that has been in development at Moog for nearly six years. Animoog captures the vast sonic vocabulary of Moog synthesizers and applies it to the modern touch surface paradigm, enabling any user to quickly sculpt incredibly fluid and dynamic sounds that live, breathe, and evolve as they play them. Whether users are new to synthesizers or are professional musicians, Animoog’s unique user interface gives them the ultimate tool for total creative expression.

Animoog is currently available on the iTunes app store for the iPad and iPad 2 for a limited time price of only $.99 USD (returning to the regular price of $29.99 USD November 18).