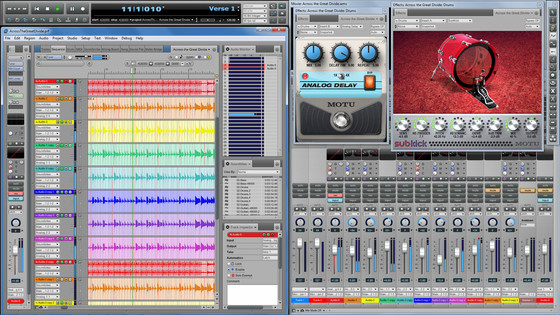 “With a long history of firsts, Digital Performer is widely considered to be a leader in audio software technology,” said Jim Cooper, MOTU Director of Marketing. “We are thrilled to bring Digital Performer’s leading role of exceptional performance and innovation to Windows-based recording artists, producers, engineers, remixers, composers and anyone looking for advanced desktop music and audio production.”

DP8 will operate in 32-bit or 64-bit mode on Mac OS X and Windows 7. On Windows, it will support VST plug-ins and Rewire. MOTU demonstrated DP8 running on HP Z Workstations and HP EliteBook Mobile Workstations provided by Hewlett-Packard.

With a simple software update, MOTU audio interface users will be able to control the mixing and processing features in their MOTU interface from OSC-compatible iPad software, which offers graphic, multi-touch control over the hardware’s mixer, EQ, compression and reverb.

iPad support for CueMix will ship as a free software update in Spring, 2012.