The UltraLite-mk3 Hybrid provides flexible and mobile operation via FireWire or hi-speed USB2 connectivity to a Mac or PC computer, with professional audio quality at samples rates up to 192 kHz and plenty of I/O, including two mic/instrument inputs, six line-level analog inputs, ten channels of analog output, stereo S/PDIF and a stereo headphone output.

“As a FireWire audio interface, the UltraLite-mk3 was an all-time best-seller,” explains Jim Cooper, Director of Marketing for MOTU. “So we added a USB2 port for users who want to connect it to laptop or desktop computers that don’t have built-in FireWire. Pretty much all Macs and PCs now come standard with hi-speed USB2 ports.” 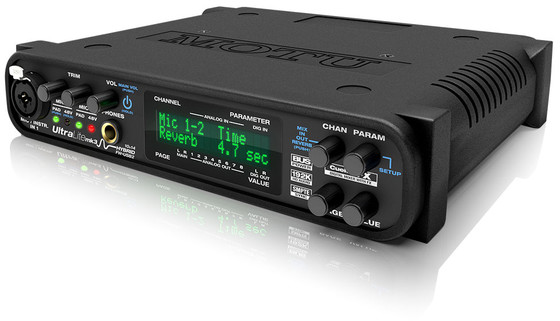 As the first-ever “hybrid” audio interface of its kind, the rear panel of the UltraLite-mk3 Hybrid provides both a FireWire A (400 Mbps) and hi-speed USB2 (480 Mbps) port. Users can connect the UltraLite-mk3 Hybrid to their computer using either port for full-featured operation and ultra-low bus latency. Using FireWire provides the added benefit of fully mobile bus-powered operation, with enough power through the FireWire cable connection from the computer to support all features, including 48-volt phantom power to both mic inputs. An included power adapter can be used for USB2 connectivity, or operation as a stand-alone mixer.

Other updates include computer-controllable pad and 48V phantom power switches for the two mic inputs, simplified two-way pad switch (-20 dB or off), and an increased mic trim range (0-60 dB).