MOTU has announced the release of a free firmware update for the 1248, 16A, 8M and other latest-generation audio interfaces that supports AVB/TSN Ethernet connection to a Mac running OS X El Capitan (10.11). 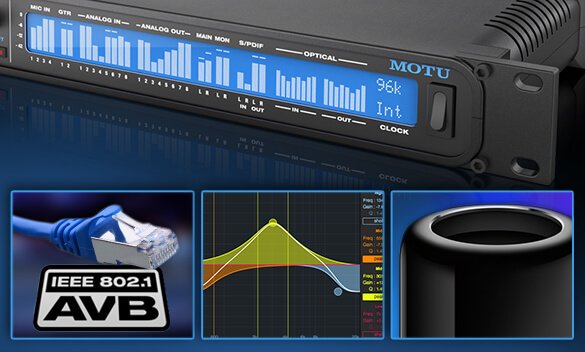 Users can connect their MOTU hardware to the Mac using a standard CAT-5e or CAT-6 Ethernet cable up to 100 meters long and stream up to 64 audio channels to and from audio applications running on the Mac at sample rates up to 192 kHz. Any recent-generation Mac with a built-in Ethernet port running OS X 10.11 is supported.

“MOTU has a notable track record of industry firsts, and we are proud to be the first pro audio company to fully adopt and support this new audio connectivity standard for Mac,” said Jim Cooper, Director of Marketing at MOTU. “We are pleased to deliver AVB/TSN support for Mac, plus other significant new features, to existing MOTU audio interface users through a free, downloadable, easy-to-install firmware update.”

With affordable cable runs that can be substantially longer than USB or Thunderbolt, Ethernet allows users to position their MOTU interface much farther away from their Mac, across the room in a machine closet with other gear, for example, or in an isolation booth down the hall, near microphones and musicians. Using Ethernet frees up the USB and Thunderbolt port(s) on the Mac for displays and other devices. Ethernet also opens up the user’s Mac to the world of audio networking.

Users can connect two or more MOTU audio interfaces to their Mac using the affordable, five-port MOTU AVB Switch™ (or any other standard AVB/TSN-compatible Ethernet switch) to build an expanded audio network. All devices on the network can transmit and receive full-bandwidth multi-channel PCM audio throughout the network with extremely low, fixed network latency, even across multiple switches (known as “hops”). In this scenario, users can connect multiple Macs, which share full access to the entire network.

MOTU audio interfaces bring the power and promise of AVB/TSN Ethernet audio networking to the Mac platform. Users can build advanced, high-performance audio routing configurations to suit virtually any use-case scenario, from small project studios to large-scale industrial installations in facilities with multiple rooms, floors and buildings. With copper cable lengths of 100 meters between any two points, or fiber-optic network cables many hundreds of meters in length, audio can be distributed across very long distances in facilities as large as football stadiums or film studio lots.

Other new features introduced in MOTU’s free firmware upgrade include remote control of preamp settings across the network, a new graphic UI for the on-screen mixer’s multi-band EQ and compressor in the web app control software, SMPTE time code support, the ability to convert time code (LTC) to MIDI time code (MTC), password protection for interfaces on a network and other productivity enhancements.

AVB (Audio Video Bridging) is a set of technical standards developed by the Institute of Electrical and Electronics Engineers (IEEE) 802.1 standards committee to extend the capabilities of Ethernet so that it can support time-synchronized, low latency streaming services throughout an Ethernet network. The IEEE is in the process of renaming AVB to TSN (Time Sensitive Networking) to address the expanded scope of the protocol into other industries (beyond audio and video) as it continues to evolve.

Managed by an AVB/TSN-compatible Ethernet switch, AVB/TSN network traffic can co-exist with other data streams on the network but enjoys reserved bandwidth to ensure timely, guaranteed delivery without interruption. AVB/TSN offers extremely low, fixed network latency across multiple hops (up to six switches), coupled with high bandwidth capacity capable of supporting over 500 audio channels simultaneously across the network.

The version firmware update is now available for download.