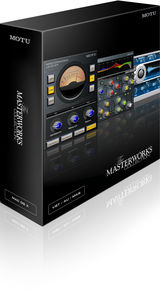 “MOTU has received many requests from Pro Tools, Logic, Cubase, and Live users who wanted to get their hands on Digital Performer’s MasterWorks plug-ins,” said Jim Cooper, MOTU Director of Marketing. “Now they finally can.”