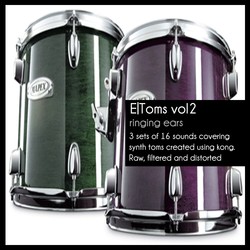 Multiples Pro has announced the release of E|Toms Vol 2, a collection of 48 toms samples.

The tom tom or tom drum is a sonic boom in sound for adding additional rhythm to an otherwise pedestrian beat.

E|Toms Vol 2 sample pack is available to download in .WAV, Kontakt, Maschine and Battery formats at no charge.