Musical Entropy has revealed an easter egg in Guitar Gadgets, a free effect plug-in for Windows and Mac featuring a compilation of “false” analog guitar pedal simulations, made to be used mainly with electric guitars and guitar amp simulations, but which may be sound interesting in any situation. 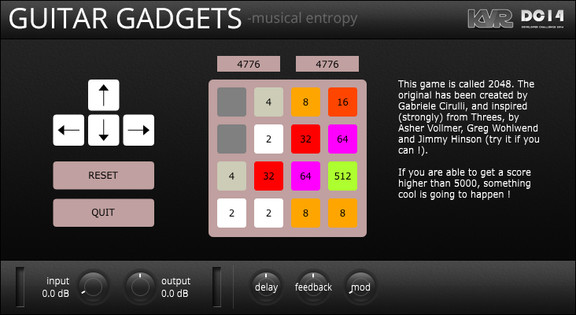 The game is called 2048. The original is a hit on smartphones nowadays, and has been created by a teenager called Gabriele Cirulli in one week end ! The game objective is to get a score as high as possible by moving all the pieces at once in one direction. When two pieces with the same number are pushed one on the other, they fuse with a doubled number, which is added to the current score. If you can make a piece with the number 2048 appear, you may consider that you have won the game, but you can still improve your high score.

Guitar Gadgets for Windows and Mac (VST/AU) is a free download.