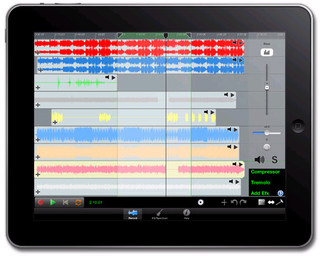 n-Track Software has released version 3.1 of its n-Track Studio app for iOS, now including MIDI support and inter-app audio.

n-Track Studio is an audio and MIDI multitrack recorder that turns your iPhone, iPad or iPod touch into a full-fledged recording studio. You can record and playback a virtually unlimited number of audio and MIDI tracks, mix them during playback and add effects.

n-Track for iOS is available to purchase for $6.99 USD. MIDI features are available as in-app purchase for $3.99 USD, 3D frequency spectrum available with the Pro-Features pack for $5.99 USD, and the 8 Effects pack costs $1.99 USD.