BOSS has announced the DS-1-4A Distortion, a limited-edition stompbox that commemorates the 40th anniversary of BOSS compact pedals.

This special version of the long-running DS-1 Distortion pedal features a unique black and gold look and the classic tone that’s been a favorite of guitarists everywhere for nearly four decades. The DS-1-4A is the first release of the anniversary year, which will be celebrated with many other activities throughout 2017. 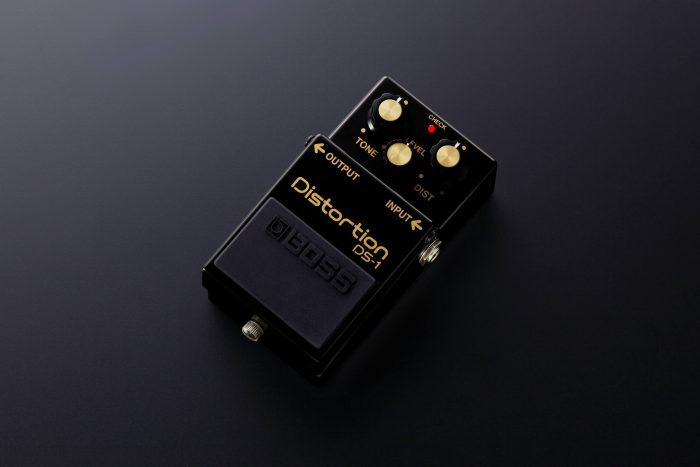 In 1977, BOSS introduced the OD-1 Overdrive, PH-1 Phaser, and SP-1 Spectrum, the very first pedals in the compact series. Over the last 40 years, the iconic line has been loved by generations, with 115 unique pedal models produced and well over 15 million units sold. BOSS pedals are used every day by all levels of players, from famous touring pros to bedroom hobbyists. Today, BOSS produces over 50 compact series models that cover the effects needs of guitarists, bassists, and other musicians around the world.

BOSS stompboxes are renowned for their great sound, rugged durability, and a unique, highly functional design that remains vital four decades on. But while these primary factors haven’t changed, the technology that goes inside the pedals has continually evolved. BOSS has always maintained a breakthrough spirit as a sound innovator, using accumulated expertise and many different approaches to achieve one goal: the best sound.

The DS-1 Distortion was introduced in 1978 as part of the second wave of compact pedal releases. Its hard-edged attack and smooth sustain was an instant success among guitarists, going on to fuel the signature sounds of numerous rock legends. This humble orange pedal has enjoyed such enduring popularity that’s it’s remained in the lineup to this day, outselling every other BOSS pedal to date.

The limited-edition DS-1-4A features a sleek black body with gold lettering, gold knobs, and a vintage silver thumbscrew for the battery compartment. The pedal comes in a special box with the BOSS 40th anniversary logo, and will be available in 2017 only.

The DS-1-4A Distortion is available for purchase for a street price of $59 USD. A special anniversary webpage celebrating 40 years of BOSS compact pedals has launched as well.