Tracktion Corporation has introduced Waveform, a new DAW to replace the T-Series workstations that have been the backbone of its product range.

In addition, initiatives to embrace new platforms such as Raspberry Pi and partnerships with manufacturers such as Media Overkill were also announced at the 2017 NAMM Show.

The new Waveform DAW takes all the key aspects of the T-Series, such as the ability to control all functions from a single screen, and adds a set of powerful features designed to speed workflow and provide a more universal appeal. The most obvious of these new features is a dedicated mixer page and a new suite of powerful plugins but all aspects of Waveform have been updated and streamlined.

Both Waveform and the BioTek Organic Synthesizer can be seen operating on the latest generation of single board computers, as represented by the Raspeberry Pi, at Tracktion’s NAMM booth. A new initiative to provide a range of software and hardware peripherals to expand the utility of these small, inexpensive computer platforms for the “maker community” was also announced.

Tracktion has begun partnering with other, like minded developers and manufacturers in a second new initiative called “Tracktion Presents.” As such, Tracktion will co-promote products from its partners and offer them on the Tracktion MARKETPLACE retail portal. The first of these new products is the Waverazor™ from Media Overkill (aka MOK). An ultra-futuristic virtual synth that splices waveforms into twisted and aggressive new sounds, Waverazor has a patent-pending oscillator design that represents a new approach to synthesis.

On the hardware side of the equation, Tracktion is demonstrating the Copper Reference™ stereo interface. 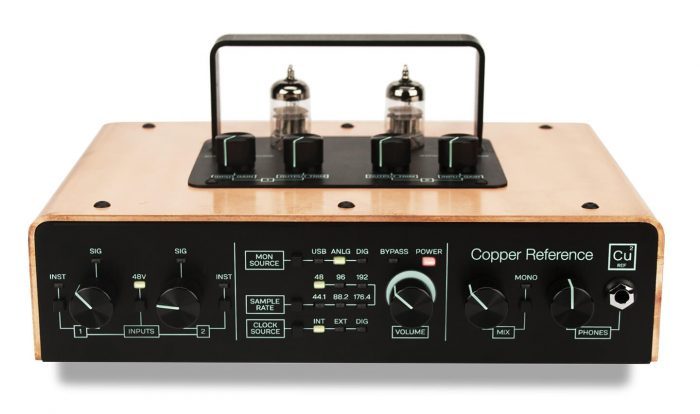 The retail launch of the high-end I/O, which was delayed in order to take advantage of some emerging technology, is finally at hand. Working closely with ESS Technology, the leading high-performance audio DAC and ADC chip provider, Tracktion has designed the Copper Reference to be the first product to feature the new Sabre Pro 9038 DAC chip capable of 140dB DNR and -122 THD. Truly embodying the phrase ‘exotic silicon’ the Sabre Pro represents a major improvement on the previous king of converters, the Sabre Reference DAC. Not to be overshadowed by the staggering specifications of the DAC, the Copper Reference input path features dual flagship AKM ADC’s run in parallel and summed to gain an extra 3 dB of dynamic range. The fully defeatable tube stage adds incredible versatility to the unit, allowing users to add subtle to extreme tube saturation to input signals. As a package, Tracktion’s Copper Reference I/O is the hot rod of audio interfaces.

Of course, Tracktion is also demonstrating the recently launched DAW Essential Collection of plugins. These highly efficient, great sounding effects provide everything you need for complete music production in a single, value-priced portable package. Take these effects with you from platform to platform throughout your composition, production and performance process.

All products are either available now, or will be shortly, via the MARKETPLACE site at Tracktion or at a growing community of preferred retailers.