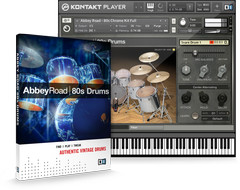 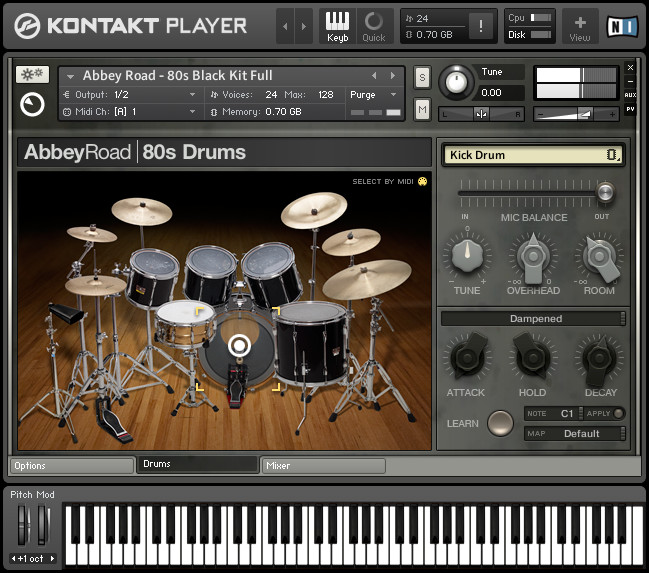 Native Instruments has announced the release of Abbey Road 80s Drums, the third instrument developed together with the iconic British recording studios.

ABBEY ROAD 80s DRUMS contains two characteristic instruments that significantly contributed to the sound of the respective musical decade – a vintage Yamaha 9000, one of the most groundbreaking and mostrecorded kits in music history, and a Slingerland Magnum Chrome with single-headed concert toms and a full set of Octobans, the melodically tuned tubular toms that were popular among drummers of that time.
Both drum kits were set up and sampled with painstaking precision in Abbey Road’s Studio Two and Studio Three, taking full advantage of the acoustic properties of these famous recording rooms.

ABBEY ROAD 80s DRUMS features an especially sophisticated implementation of the typical “gated reverb” technique that enabled the distinctive huge-but-tight drum sound of the 80s. Different sets of ambient microphones were used at Abbey Road to capture additional, strongly compressed versions of the room sound, including a mono overhead signal recorded through a STC 4021 “Ball and Biscuit” microphone and a specially built replica of the SSL E-Series talkback compressor, utilizing a further popular recording trick of that time.

Selected Neve preamps, an analog 2-inch tape machine and other exclusive outboard gear further contribute to the genuine, powerful sound character of ABBEY ROAD 80s DRUMS. Up to 27 velocity layers per instrument, each with up to six additional variation samples, guarantee maximum authenticity both for rhythm programming and for real-time MIDI-controlled playing. The highly functional user interface offers convenient control over all articulation, sound shaping, mixing and routing functions, with envelopes and volume of the gated ambience individually adjustable per instrument group. Advanced randomization can even add subtle nuances to the tone and timing to make it virtually indistinguishable from a studio-recorded drum performance.

Abbey Road 80s Drums is available for purchase in the NI Online Shop on DVD and as a download for $119 USD / 99 EUR.