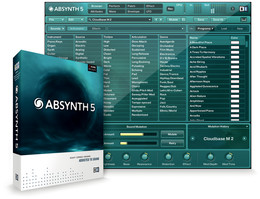 Native Instruments has announced Absynth 5, a new version of the semi-modular software synthesizer for Windows and Mac.

The fifth version enhances the profound sonic capabilities of ABSYNTH with powerful additional synthesis and effects features as well as overall improved audio quality, and offers an ingenious new way to create complex sounds based on musical attributes.

ABSYNTH 5 will be available in October 2009 for a suggested retail price of $199 USD / 179 EUR, and will also be part of the new KOMPLETE 6 bundle. An update for owners of previous versions of ABSYNTH will be available for $79 USD / 69 EUR.