Native Instruments has announced the release of Abbey Road Vintage Drummer, a new Kontakt instrument that features the sound of two vintage drum kits from the 1940s.

Both kits were recorded with a combination of state-of-the-art equipment and period microphones at Abbey Road Studios in London, providing a natural, open sound suitable for contemporary productions. For the first time in Native Instruments’ successful ABBEY ROAD Series, VINTAGE DRUMMER includes brush articulations especially recorded to provide the authentic sound and style of the swing/big band era.

ABBEY ROAD VINTAGE DRUMMER features extremely rare instruments from the earliest period of trap kit recording. The first kit consists of a 1940 Leedy 26″ bass drum, and two late-1930s tom toms once owned and used by the legendary percussionist James Blades. This combination delivers an earthy, wide open sound that lends itself to recordings where bigger, but less focused, low end is desired. A classic 1940s Slingerland Radio King was also sampled for this release. The Slingerland’s smaller 22″ bass drum and 13″ and 16″ toms provide more focus than the James Blades kit, but still deliver a warm, chunky timbre to any producer seeking a unique, natural drum sound. To add to the authenticity of this KONTAKT instrument, both kits were recorded with original calfskin heads, period snare drums dating back to the 1920s and original Trans Stamp and First Stamp Zildjian cymbals. 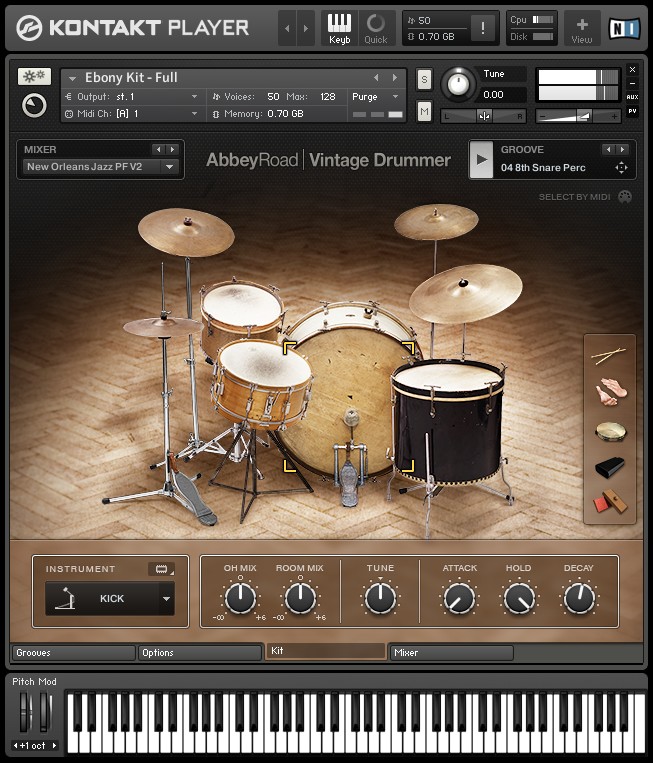 The drums, the studio, the drummer: Ultra-rare drums with the authentic sound and feel of a golden era. Recorded at Abbey Road Studios, London.

VINTAGE DRUMMER was recorded at London’s Abbey Road Studios in legendary Studio Two, originally constructed in the 1930s for big band recording. Alongside traditional microphone techniques, two extremely rare vintage microphones manufactured by EMI in the 1930s were used to add unique tonal color to VINTAGE DRUMMER. Users can mix in these ‘vintage channels’ with the modern state of the art equipment for a wide variety of unique tones not found with modern kits and equipment alone. Any combination of modern and vintage equipment can be dialed in, allowing users to customize the sound in unique and powerful ways.

VINTAGE DRUMMER also features brush articulations – a first for an ABBEY ROAD Series release. Users get inspiring brush techniques, alongside traditional snare sounds played with sticks. All articulations also come as grooves in the included groove library, which contains patterns from ragtime, swing, and jazz as well as a wealth of modern soul, funk, and indie styles. Regardless of genre, producers looking to add original flavor to their productions will find unique textures in ABBEY ROAD VINTAGE DRUMMER.