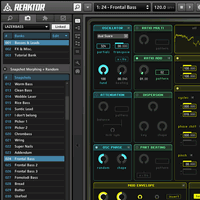 Native Instruments has announced version 5.5 of Reaktor, the latest version of its modular sound studio for Windows and Mac.

Version 5.5 will be a free update, and it is based on many improvements that we have made to Reaktor recently. It also has significant new synthesis capabilities that can literally take a lifetime to explore – both conceptually as a builder, and sonically as a sound designer and musician.

It has been quite a long while since we have released the last “big” update of Reaktor, but it has always remained a very central part of the NI instrument range. Last year it was the platform for some very well-received and successful instruments: the Spiral sequencer by Lazyfish, my own Spark synthesizer and Tim Exile’s “Finger”. The new Reaktor version will be the basis for even more of these instrument releases from us in the future.