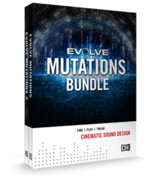 This bundle contains both versions of the Heavyocity-designed EVOLVE MUTATIONS Kontakt instruments.