Native Instruments has announced the release of Golden Kingdom, a Maschine expansion pack aimed at producers looking to create tracks with the sound and energy of the modern hip hop styles that have achieved worldwide commercial success. 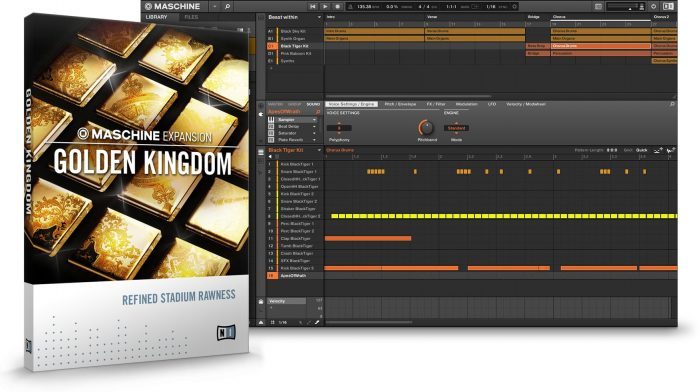 GOLDEN KINGDOM delivers a wealth of sound for contemporary mainstream hip hop. The extensive sample content in GOLDEN KINGDOM combines larger-than-life drums, distorted synths, and overdriven breaks culled from southern hip hop, EDM, and cinematic scores – the elements that have made this style of hip hop a worldwide commercial phenomenon.

Exclusive new MASSIVE and MASCHINE Drum Synth presets provide producers with ready-made, genre-specific sounds that can be tailored to taste, while a new set of patterns deliver convenient starting points for original productions.

A compact version of GOLDEN KINGDOM is also available as an iMASCHINE Expansion, for creating beats on the go. Tracks can be exported to MASCHINE STUDIO, MASCHINE, and MASCHINE MIKRO for completion.