While each effect has its own distinct sound, both provide a rich, harmonic character that adds dimension and depth to any source. A first-of-its-kind display provides visual feedback to monitor the effect’s output in real time – a powerful feature for quickly shaping the effect with ease and precision. The REVERB CLASSICS were created in cooperation with Softube, the acclaimed Swedish company renowned for their painstakingly accurate emulations of audio hardware.

The REVERB CLASSICS faithfully recreate two renowned algorithmic reverb units that rose to prominence 1980s and 1990s. Each has been featured on countless studio recordings and is a standard effect in top studios around the world. The RC 24 provides a rich, dark, and instantly identifiable sound suitable for anything from subtle widening to dramatic sound design. The RC 48, while sharing some similarities, sounds richer, lush, and somewhat brighter by comparison.

The most striking feature of the REVERB CLASSICS is the prominent graphical display, which takes up roughly half of the interface. This display effectively visualizes the shape and depth of the reverb, as well as the decay of the reverb tail. The display immediately reacts to parameter adjustments, allowing users to visually monitor the effect in real time, and providing a new approach to reverb design. 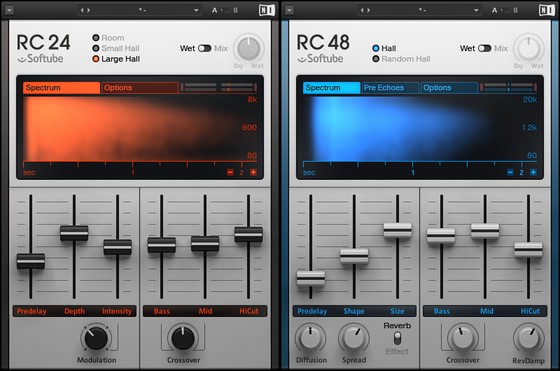 The Reverb Classics bundle (VST/AU/AAX) is available to purchase for $199 USD / 199 EUR. The individual effects are also available separately for $149 USD / 149 EUR each.